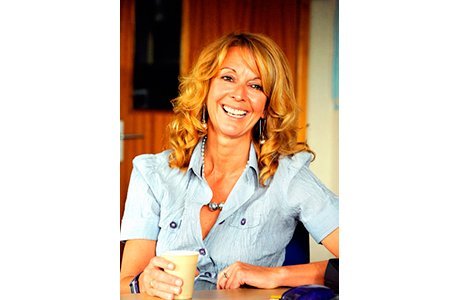 What an absolute thrill and honour it is to be the new president of the International Association of Concrete Drillers and Sawers.

It’s also a huge personal honour to be following in the footsteps of my dad, Peter White, who became president in 2009. It was dad that gave me the bug for this industry and he, along with my company D-Drill, is very excited that I have been made president so it’s a very proud moment for the whole family.

The media like that I am the first female president but I think, over the years, they’ve got to know me as the managing director of D-Drill in the UK and someone that pushes our industry forward rather than seeing me as any different because I am a woman.

It’s been quite a big deal here in the UK and I’ve had a fair bit of media coverage surrounding my appointment as president – will it change me? I don’t think so but I will be available for autographs and selfies at our next meeting!

Construction is perceived to be a very male-dominated industry, particularly in specialisms such as concrete drilling, sawing and demolition but I think we all agree that it shouldn’t matter about gender, it’s about your ability and knowledge to do the job. That said, there have been barriers to knock down across every industry.

I believe my appointment as president of the IACDS proves that, actually, construction has taken great strides over recent years all over the world and is becoming an environment where women can thrive.

If you look at growth in the past couple of years, construction has been up and down across most of the globe compared to other sectors and that is something that we have to change.

In the UK, for example, it’s absolutely vital, that we get construction growing on a consistent basis to give companies such as D-Drill the opportunity to invest and expand.

We have just had a General Election which has delivered a majority Conservative government (a centre-right party) – something the construction sector was hoping for because the industry felt this was more likely to be better for business and would help deliver more projects.

On the back of that result, we need to see greater investment in infrastructure and housing in order to get steady, consistent growth over the next few years. Then we can all invest with confidence in new talent to replace those people who left the industry for good during the recession.

We also have the question being thrown around about the UK’s place in the European Union and the new Government has promised a referendum on the topic. From my perspective, I don’t really want another couple of years of uncertainty around business and I think that is what this referendum and the build-up to it will create.

During my presidency I will ensure I speak up for construction – especially our specialist sector companies – to make sure our voice is heard by policy makers.

In the UK, I certainly know the issues we face extremely well but during my time as president I want to know what colleagues around the world are thinking and the barriers you are coming up against too.

As well as me becoming president, there have been several changes to the IACDS committee. Firstly, I would like to thank outgoing president Lars Sandström for the fantastic job he has done – he is the finest Swedish export since Ikea’s meatballs!

Also, Anna and Daniel Trachsel are stepping down as secretaries (is everyone deserting me!) and we thank them for all of their work. Jose Blanco (it seems ‘White’ is a popular name in any language when it comes to the IACDS) is stepping in to become our new secretary while Norikazu Shibuya remains vice president and Switzerland’s Philippe Wingeier is also a new vice president.

I am a big believer in this association and I believe that when we work together and speak with one voice we can provide a very powerful force within our industry around the world but I will need everyone to let me know the issues so we can act together.

I really believe this can be an exciting, positive couple of years for me in this role and for our industry as a whole and by bringing forward new ideas and best practice, we can push each other on to be improving all the time.

You wouldn’t believe just how much I love our industry and how much I want it to succeed – when I tell reporters in the UK that I think ‘concrete cutting is sexy’ they think I am joking. But I mean it – I wouldn’t change what I do. I know there are things that we can put right and, as I said above, that’s something we can do together.

Let’s hope the next two years are really good for business, are a lot of fun and finally bring our wonderful industry the recognition it deserves.