You are here: Home / Communication / News / CONCRETE CORING COMPANY wins the award for the best job of the Diamond...

IACDS announced that the company CONCRETE CORING COMPANY was the winner of the Diamond Award 2019 in the job category, during the ceremony held on 11th of April, in the frame of the trade fair BAUMA.

This line is an underground tunnel dedicated to forwarding, and its start and end points are connected with the subway system while it is in operation.

Interference with subway operations due to the construction can never be permitted, but work to remove an existing sidewall was necessary.

In the existing sidewall removal method, a cutting removal system was employed using a wire saw, which is a static dismantling method that has often been used in subway remodeling works. 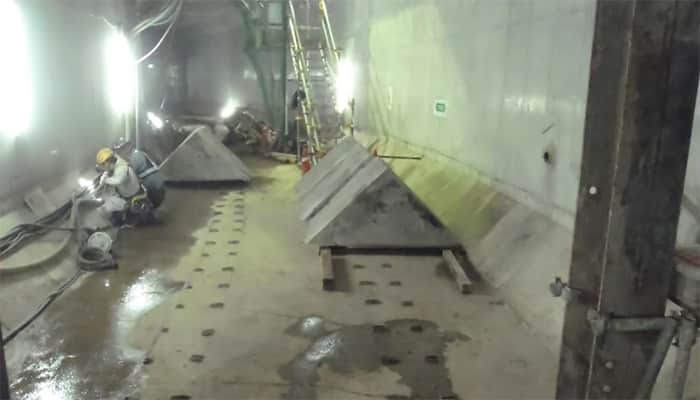 The most distinguishing feature of the slide-down was a lowering device for moving heavy blocks obliquely. With an ordinary hydraulic jack, it is difficult to safely control a block that comes down linearly and obliquely.

Considering the available construction space, there was no practical jack that was convenient for the worksite. The company, therefore, developed and manufactured a slide-down device.

The main point is that the weight of the block is received by a rotating support. By rotating the support, slide-down of the block could be easily controlled and guided.

Also, the part in contact with the block was made of φ80 round steel, and the contact part naturally shifted to an appropriate position as it slid down. By these innovations, the company were able to continually support the weight of the block and safely control it during slide-down.

In addition, the present device also has a sideways pull function, so that the block can be smoothly moved to a predetermined position. This contributed to the total efficiency improvement of the removal work.

BRAUN and CONCRETE CORING COMPANY, winners of the Diamond Award 2019
Scroll to top